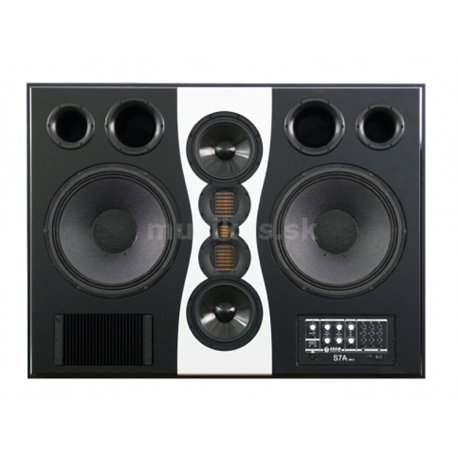 od 1.5.2009 je na tento studiový monitor Adam Audio poskytována záruka 5 let
The ultimate main monitors
he main monitors S6X and S7A Mk2 are designed for large control rooms and film studios. They present a completely new, impressive concept: to transport the unique realism of the ADAM monitors at a very high SPL level. In accordance with ADAM’s main goal to achieve the best possible authenticity in music reproduction, any overemphasis of the bass frequencies should be avoided. Furthermore, it is essential for neutral sound characteristics at high volumes to achieve a wide dispersion in the horizontal plane and a somewhat narrower dispersion in the vertical plane, thus reducing reflections from the ceiling, the floor or a mixing console. Less reflection means superior imaging and better localization, facilitating the best possible transportability of mixes across the widest range of playback systems.

The arrangement of the seven discrete loudspeakers facilitates a gradual transition of the chassis dimensions. One of the most important aspects of these monitor’s new approach is the horizontal symmetry of the drivers, which could be referred to as advanced D´Appolito array. If the drivers are filtered properly there are – besides the dispersion characteristics mentioned previously – two more advantageous results:

* There is an absence of any sudden change in directivity with frequency, leading to harmonic dispersion behavior throughout the audio band. The absence of sudden changes in directivity is not visible in a frequency plot, but clearly audible - especially with a full range of materials, from single complex sources such as the human voice to the wide sonic palette of large orchestras.
* The dynamic capabilities of the monitor are distributed over the audio band more equally, and louder recording or mixdown sessions with SPL´s of 120 dB are handled without offending the ear.

Impulse Coupling
In order to get a precise and undistorted reproduction, all drive units are mounted on an ultra stiff 25 mm thick aluminum honeycomb plate, which is acoustically dead - thereby providing an extremely mechanically stable bridge to the cabinet (IC). As the drivers are much better fixed this way their time behavior (and consequently their clarity) is audibly and measurably improved.

Amplifiers
Both the S6X and the S7A Mk2 ADAM use the new generation of switching amps and power supplies. These are combined in an extremely powerful (1000 and 1500 W rms respectively) yet cool amplifier assembly. Together with the built in overload protection circuits these amplifiers will run reliably and at constant safe operating temperatures not possible with conventional designs. The amplifiers are of extremely low output impedance, leading to a damping factor >4.000, enabling them to strictly control the motion of the drive units.

The front panel
Numerous controls on the front panel introduce a new degree of control for main monitors. Along with the input gain, there are level controls for each of the four drivers, shelving filters on both ends of the frequency spectrum, and three full parametric EQs (20-200HZ) that can be used to combat standing waves in the control room. The EQ can be bypassed individually or as a group so that their overall effect can be analyzed in direct comparison to the unaffected signal. In large film score mixing rooms, it may be desirable to have a representation of the sound in the theatres. To meet the ISO 2969 Standard, the Dolby™ X-curve has to be applied. Using pink noise, the X-curve engages a 3 dB per octave roll-off above 2 kHz. Both the S6X and S7A Mk2 have a switch that activates this filter, eliminating the need for external processing during the film mix.

17 other products in the same category: